Yesterday, the following query was submitted to the R-SIG-phylo email listserve:

Ideally, we'd take a model-based approach to this problem, as pointed out by Matt Pennell. Unfortunately, this has not yet been done. In its stead, however, it is not too difficult to devise a somewhat ad hoc, simulation-based alternative. Here was my proposal:

What about the admittedly ad hoc approach of computing the correlation between the states at ancestral nodes for x & the squared contrasts for corresponding nodes for y? Then you can generate a null distribution for the test statistic (say, a Pearson or Spearman rank correlation) by simulation. This seems to give reasonable type I error when the null is correct, and when I simulate under the alternative (i.e., the rate of Brownian evolution along a branch depends on the state at the originating node) it sometimes is significant.

Here is the function I proposed and submitted to the list to do this, I have since posted a more sophisticated method & function here.

I was naturally somewhat curious about how it would do. To figure that out, we need to simulate under the null & alternative models. The null model is trivial, of course - constant-rate Brownian motion. The alternative model is a little trickier. Here, I see two different alternatives: (1) the rate of branches descended from each internal node is a linear function of the state at that node; or (2) the rate of each branch is a linear function of the average state along that edge, where we compute the average as the mean of the rootward and tipwards nodes subtending the edge. [**Note that in the simple function above, we explicitly assume (1); however in the full version I allow for either model to be assumed using method="by.node" for (1), and method="by.branch" for (2).]

Let's first simulate under the proposed alternative model and see if the result is reasonable. I will show option (2) here: 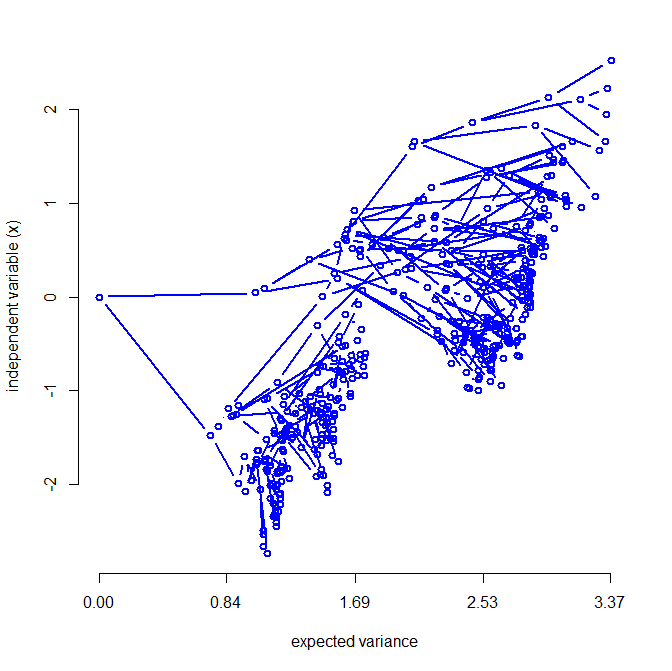 Well, one simulation test does not a new method make. Here's some code that I used to run simulations under the null & alternative models [actually here under model (1), from above]:

And here are the results:

So it would seem (based on these very limited simulations) that the method has type I error near or below the nominal level. Furthermore, the power is not too bad when the alternative hypothesis is correct. Finally - the mean slope of the regression between contrasts variance and ancestral states is actually very close to our generating relationship - in this case 1.0.